Traffic on British roads has reached a record high, according to statistics recently published by the Department for Transport (DfT). In the year ending March 2016, 318.5 billion vehicle miles were travelled, a 1.8% rise on the previous year. 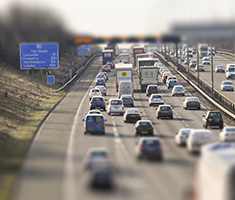 According to the Express, these figures show that in the last two decades the number of vehicle miles has increased by 18.3%, with the proportion covered by cars rising 13.2%.

The government claims the rise in traffic volumes is due to economic growth and low fuel prices; in the year ending March 2016, premium unleaded petrol was 13.1p per litre cheaper than the previous year, while diesel was 16.9p cheaper.

RAC roads policy spokesman Nick Lyes said: "While traffic has only increased very slightly on the previous year it has taken us to record levels, but the longer-term picture is more concerning, with overall traffic since 1995 growing by 18.6% -- in stark contrast to the overall length of our roads, which has only increased by 2.4%."