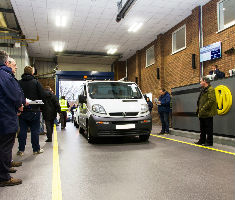 Figures released today by the remarketing expert show a record average van selling price of £5,398 for the eight-week period, despite average damage increasing over the same period by 18% to £903 (£166 higher than the same period in 2016).

The figures also show that vans sold by Manheim in the last two months of the year had an average age of 59 months, three months younger than the same period in 2016. In addition, average mileage stood at 77,460 miles - the highest figure for 2017 and a year-on-year increase of 2,400.

While van de-fleet volumes continued to soften during November and December, with a 3% reduction on October and a 14% year on year reduction, LCVs falling within the £6,500 - £8,000 sale bandings performed well, achieving an uplift of just over 3% compared to 2016.

Matthew Davock, Head of LCV at Manheim, said: "Against the pressure of a record breaking 2016, and an expected market decrease in volumes, 2017 figures have been incredible. We have reported an annual growth of 5% for our overall sold volume, and our van buyer base has also grown by a further 18%, extending our industry leading position in the van remarketing arena.

"As predicted in our Q4 outlook, both average age and mileage figures increased as we approached the end of the year, yet our average sale price continued to exceed expectations. In addition, and despite the decrease in volumes as we headed into the final months of the year, performance and overall first-time conversion rates were both staggering and is further proof of a healthy marketplace."

Manheim also reported strong attendance at LCV auction events. The number of buyers attending physical auction events rose by 16% for the year, while online-only events continue to be widely received as attendance jumped by 19%.

The data also shows that 86% of LCV sales during November and December attracted an online bid, with 38% of all vans sold to an online bidder during this period.

On the year ahead, Davock said: "I'm confident in the robust nature of the used van market and the outlook remains positive. As we enter 2018, I don't think we'll see the abnormal spikes of previous years, and de-fleeted stock numbers will continue as normal in January. The lower volume and lower duplication of stock will further fuel both buyer and vendor appetite to purchase, leading to a much healthier marketplace."