Vehicle logistics platform Movex played a starring role in getting actor Sean Bean’s classic Land Rover Series III Lightweight from London to Sheffield, where it was auctioned for charity. 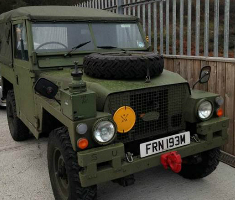 Sheffield United Football Club, of which Sean Bean is a famous fan, held a gala dinner in December to raise funds for the Weston Park Hospital Cancer Charity, which the actor has also long supported. The club asked Sean Bean for a donation of signed memorabilia and was astounded when he offered up his beloved Land Rover to be sold at the auction.

The job was loaded onto Movex’s online platform, and national vehicle movement specialist, Arron James, which has carried out around 1,500 vehicle movements for Movex, quoted £250 to transport the vehicle. However, once the company found out the details behind the job, it generously donated its entire fee towards the fundraising effort.

James Brocklehurst at Arron James said: “We are very experienced in assisting dealers move vehicles around the UK in both the prestige and volume markets, but this job was a little different! It was a real honour to be involved in such a good cause and after hearing of Sean Bean’s incredible act in donating his treasured Land Rover, we felt that waiving our charges for the job was the least we could do.”

Daren Jones, managing director of Movex, said: “We were delighted that Sheffield United turned to us to help them with this very special vehicle movement, and were overwhelmed by the generosity of Arron James in donating its transport fee. Movex matched Arron James’ donation, so not only did the vehicle arrive safely and on time, but the charity also benefited from additional fundraising.”

The military-spec Series III Lightweight Land Rover, which was signed by Sean Bean, eventually sold for £8,000, with the event as a whole raising an astonishing total in excess of £24,000 for the Weston Park Hospital Cancer Charity, which is close to Sheffield United’s Bramall Lane stadium. As well as the auction, the 160 guests were treated to a performance by Myleene Klass.

Dave McCarthy, Sheffield United Operations Director, said: “The Weston Park Fundraiser was a spectacular event that will stay long in the memory. We were stunned when Sean offered to donate his Land Rover for the auction.We needed to get it to Sheffield as quickly and efficiently as possible, and Movex swiftly secured a transport provider.
I was blown away by the kindness of Arron James in not charging for the job, and for the generous donation of £250 from Movex.”

Movex is the UK’s leading online vehicle logistics platform, facilitating vehicle movements for a wide range of customers, including franchised and independent dealerships as well as vehicle remarketing organisations. Customers who need a vehicle moved enter their requirements onto Movex.co.uk, where a network of over 600 approved transport providers quote for the job or accept a fixed price.