As part of our Manheim at 100 celebrations, we’re taking a look back at some of the industry innovations that have defined us over the last century. For this first blog, we caught up with Nigel Myers, Group Property Director & Head of Insurance – whose family helped build our company in the UK – to talk about the creation of our auction centre in Rothwell, Leeds – Europe’s first dedicated motor auction centre. 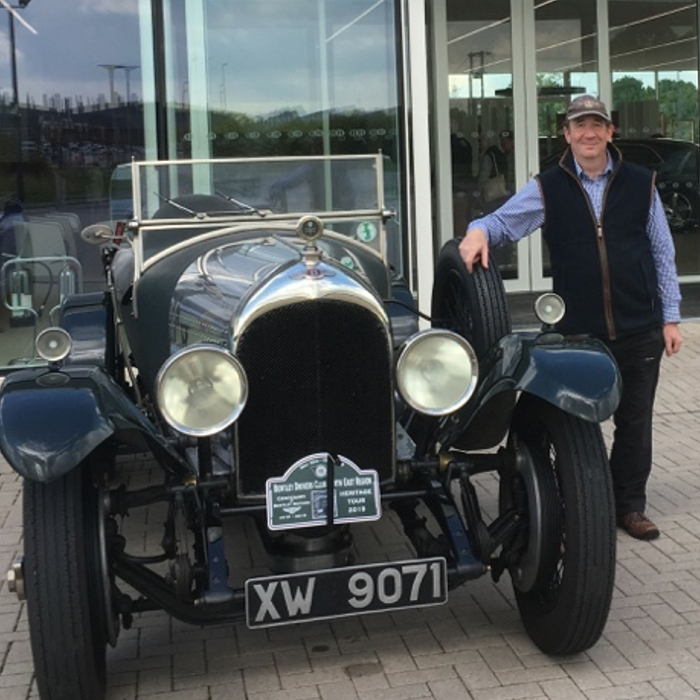 Family is at the heart of our business, whether it be our family ownership at Cox Enterprises through to the way we treat team members and customers. It’s impossible to tell the story of our 100-year history without talking about family, and indeed that’s where this story of the creation of Europe’s first purpose-built motor auction begins.

From 1946, Central Motor Auctions (as the business was known back then) was under ownership and leadership of the Myers family. Eric Myers, a pioneer in the motor auction industry, grew the business from one rooftop to become one the UK’s dominant players throughout the 20th century. His son Anthony, and grandson Nigel also helped lead the business during this time.

Nigel describes the sort of person Eric was: “Eric was at heart a hard-working family man, always striving to grow the business. But despite his success, he remained a down to earth character. He had as much time for the cleaner in the salesroom as he did for his fellow directors. He taught me a great deal and was undoubtedly a great influence on my life.”

Indeed, Eric’s core values remain a part of our business today, and it was his hard-working attitude, entrepreneurial spirit and knack for innovation that were behind the decision to create Europe’s first purpose-built motor auction centre.

“The auction business, which had been around since 1921, was purchased by our family in 1946. Up until that point it had been a fairly modest business which sold all sorts of things such as horses and bric-a-brac in addition to vehicles. And indeed, it continued this way under the leadership of my Grandfather Eric until the early 1960s.”

Nigel continues: “The auction house had been based in the centre of Leeds for three decades but unfortunately became the subject of a compulsory purchase order in 1961 leaving my Grandfather searching for a new, and ideally bigger home for the business. He explored many options but a site in Rothwell, just outside of Leeds, stood out as it was much larger and had no buildings. My Grandfather saw an opportunity and thankfully had the foresight to see that motor vehicles were the way to go.”

With the land now his, Eric jumped at the opportunity to build a dedicated motor auction centre – the first of its kind in Europe. Up until then all auctions were largely converted farm or light industrial buildings.

But it wasn’t just the size of the land that was behind the success of the site, its location also proved to be perfect. By the end of the decade the M1 motorway link to Leeds was established just down the road from the site, giving the business and its customers incredible transport links to and from the site. By 1999, the M1 to A1 road link was also built, confirming Rothwell as almost the perfect location.

“It was a stroke of luck really. Had it then been known at the time of the move that the M1 would be routed in close proximity by the end of the decade, then there wouldn’t have been any concerns about the move, but Eric didn’t actually find out about it until after the purchase. Still sometimes you need some luck, and my Grandfather certainly made the most of the opportunity.”

The auction centre at Rothwell, Leeds remains a key Manheim site to this day and is also the European headquarters for Cox Automotive. Over the years it has seen hundreds of thousands of vehicles pass through its lanes and has created many more memories along the way.

Nigel, who joined the family business in 1986, reminisces about what it was like to be part of family business in his early years: “I was effectively born into the business, being brought to the Rothwell site by my father Anthony most Saturday’s from five years old. Some of my earliest memories are of making catalogues, taking entry forms to and the from the rostrums, and even a certain amount of ‘bid spotting’!”

“I feel I could write a book with the memories I have of the Rothwell site, but for me, one that stands out most is our regular classic car sales throughout the 1970s and 80s. The interest was immense and there were so many people packed in the salerooms that the cars had to creep forward ever so slowly so as not to run over any toes!”

“The clear stand out vehicle from those sales has to be Mick Jagger’s famous Pink Cadillac. I can still picture it so clearly as it went through the auction lane and can even remember who bought it! The interest in the vehicle was such that even the press turned up – we certainly couldn’t have fit any more people in the saleroom that day.”

“These memories are what it’s all about. To me, Manheim is far more than a job, but a way of life and I don’t know what I’d do without it.”

Since 1996, the business built by the Myers family has been owned by Manheim and part of Cox Automotive. The family ethos runs through the Cox family and Nigel is happy that his Grandfather’s core values are reflected in the business to this day.

“Back in the mid 1990s, when I had to make the decision on behalf of the Myers family as to whether or not we should sell the business, I have to admit it was the most difficult decision I’ve ever had to make in my life. Remembering my Grandfather’s ethos however did help greatly in reaching the decision to do so. Having gone over to the US to meet with Jim Cox Kennedy and other members of the Cox Board, I knew that the decision to sell would be in the best interests of all the staff. My Grandfather’s priority was always looking after the staff, and to continue investing the profits back and growing the business. I could sense this was an ethos shared by the Cox family - and reflecting on the fantastic support given to team members throughout the Covid pandemic, what better evidence could there be that that same ethos lives on.”

“The fact that that I’m still here 25 years down the line is testament to Cox’s values. They could have shown me the door when they acquired Central Motor Auctions in 1996, but instead they understand that you need to let the local experts run the businesses and give them all the support and encouragement they need to succeed. The business still means the world to me.”

This is the first in a new series where we explore the innovations that define Manheim’s 100-year history. To keep up to date with all the latest new and content, visit our ‘Manheim at 100’ website or search #Manheim100 on social.