Manheim at 100: How virtual auctions revolutionised the industry in the 90s

As part of our Manheim at 100 celebrations, we’re taking a look back at some of the industry innovations that have defined us over the last century. For this blog, we discuss how the rapid emergence of new technologies in the early 90s revolutionised an auction industry that had remained largely unchanged for decades.

It doesn’t bear thinking about where we would have been over the last year without technology. It has helped us to stay connected to our loved ones while we’ve been kept apart, created new ways of working by allowing people to work remotely, and enabled businesses to keep operating even as their doors remained closed.

In terms of the automotive industry, much has already been said about how digital retailing has allowed dealers to keep selling cars to the public, but in the wholesale market, almost every trade has been completed online since March 2020. Indeed, without platforms like Simulcast in place, the wholesale industry would have ground to a halt. Instead, it has thrived.

While the technology behind the latest online auctioning platforms is new, the idea isn’t. As a business, we’ve had ‘virtual’ auctions incorporated within our sales programme for over three decades now, starting with ICA’s AuctionVision satellite auctions and CMA’s early online auctions.

But what led to this shift in the early 90s?

Nigel Myers, Group Property Director & Head of Insurance for Cox Automotive Europe, and whose family-owned CMA prior to its acquisition by Manheim, describes the shifting mindset towards technology in the early 90s: “It was a time where people were really beginning to grasp what technology could do and that traditional ways of working were going to be challenged. We adopted the view that we must embrace these emerging technologies before our competitors. We considered it essential to remain at the forefront of the industry.”

The industry’s first foray into ‘virtual auctions’ was in fact via satellite television and not the internet. AuctionVision, the brainchild of Richard Harper and John Bailey, offered the ability to buy and sell vehicles remotely for the very first time. It revolutionised and industry that had remained largely the same for decades and provided the foundations for what we know as online auctions today.

Anyone familiar with the telethon events that were popular in the 80s and 90s can picture the scene. Sales were broadcast via satellite directly to customers’ TV sets. In order to bid, buyers would call in live to place bids over the phone to a team of call operators sat on banked seats. The bids would be relayed to the auctioneer who would manage the sale as usual.

While certainly a primitive and clunky system compared to today’s standards, it maintained the sense of theatre that physical buyers enjoyed and were used to. It was also effective, setting the tone for how virtual auctions could operate in the future. 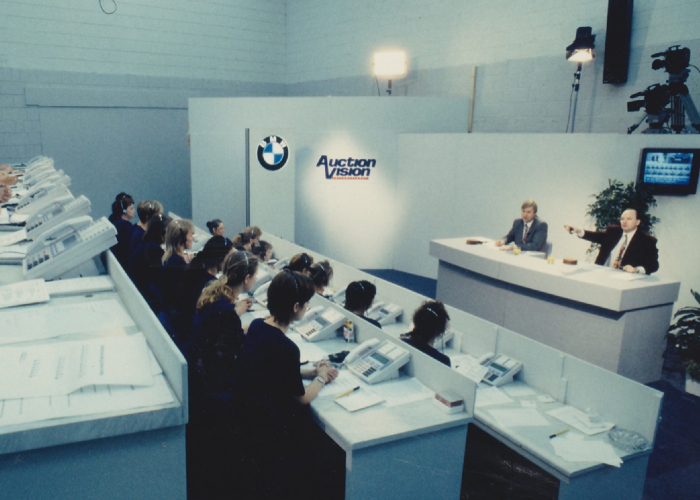 While ICA was reaping the benefits and customer recognition of being the first to market with their virtual satellite auctions, Central Motor Auctions (CMA) were quietly working away behind the scenes on a system of their own.

Electronic auctions, as they became to be known, were created off the back of George Inch’s vision for the future of ‘vehicle remarketing’ – a term we’re used to hearing today but was only just emerging by 1993.

George Inch, who had recently been made CEO of CMA, became aware of an online auction system that had been developed by automotive consultancy business Mitac. Soon after, CMA and Mitac teamed up to bring electronic auctions to CMA customers for the very first time.

Nigel Myers explains how the system worked: “Catalogues were routinely emailed out to buyers prior to the auction and then the buyers would log in before the sales started, usually around 11am. For each lot, an asking bid would be displayed on screen and the buyer would simply hit a button on their keyboard to accept the bid amount. The auctioneer could reduce the bid increments as the bidding slowed, then after so many seconds without a bid being accepted, the ‘virtual gavel’ would drop.

“It’s important to remember that these were separate sales to our physical auctions. It’s not like today where both online and physical buyers can bid on the same vehicle. While it was certainly a simple solution compared to the Simulcast system our customers now use, it was effective and both buyers and vendors loved it.”

While the electric auctions were certainly popular, they weren’t without their drawbacks. Nigel explains: “In the early days it was mainly franchised dealers buying OEM stock by electronic auction. Of course, there was no sophisticated vehicle imagery in those days, and so it was a case of a single photograph of the car if you were lucky, or often a full reliance on the catalogue description. We did have a return option if the car failed to meet its described condition when collected or delivered, so you could say that was an early iteration of the assurance products we have today.”

Of course, shortly after the creation of these early online systems, ICA and CMA combined to become one business: Manheim. The full story of how that happened can be found here, but as we all know, a new and more sophisticated online auction system was soon to replace both ICA’s and CMA’s solutions – Simulcast.

It was clear from the offset that the virtual auction revolution would happen, but the question was always about how long it would take for it to become the primary disposal method. George Inch of CMA wrongly anticipated that it would happen very quickly, but in fact it took more than 20 years. It could be suggested that it actually took a global pandemic for virtual auctions to really take hold.

What we do know is that they are here to stay. Modern online auctions are a far cry from where we came from, but the fundamental idea has remained the same. It’s about bringing buyers and vendors together, wherever they are in the world, to complete fast and rewarding transactions. Buyers now have access to more stock than ever before, while vendors get the largest possible audience for their stock. It’s a win-win for everyone.

This is the second blog in our ‘Innovations that define us’ series as we celebrate Manheim’s 100th birthday. The first blog about the creation of Europe’s first dedicated motor auction centre can be found here. To keep up to date with all the latest news and content, visit our ‘Manheim at 100’ webpage or search #Manheim100 on social.